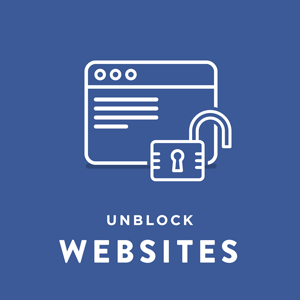 Some governments, internet service providers, or corporations limit access to some websites or services based on your internet traffic. Mostly for different reasons including demoting the foreign online services (e.g. Google search engine, Netflix) to encourage native services (e.g. Baidu, Youku), demote the use in office work hours, on moral grounds, or because of protecting its internet network from outside infiltration. These are some reasons out of many, and there is no limit as they own the ISPs. However, you can unblock websites using a VPN.

How Does A Vpn Unblock Websites?

VPN acts as a website unblocker and re-routes all your web traffic through an encrypted tunnel. The tunnel encrypts all your data packets to make it unable to inspected, censored, and manipulated. Blocking works both ways, either your ISP blocks websites or websites blocks IP addresses by region.

A VPN unblock websites evenly; when you connect to one of the VPN servers, you’ll be able to surf the internet with a new IP address and location to unblock websites that might be censored for you.

Why would I unblock sites?

Let’s say you have moved to a different country. You are waiting at the station for train to come, meanwhile, you picked up your mobile device to watch YouTube but all you received was a country restriction error message. While, on the train, it’s a long way to home and you thought of talking to your loved ones on Skype, Facebook, or Twitter but sadly all these services are blocked as well, and all you are left with is frustration and a long wait.

VPN unblocks every restriction, no matter where ever you are and what you’re trying to browse. It gives you the freedom to browse the internet uncensored as it was supposed to.

Downloading a VPN is easy, and you can start using in just a few step.

VPN service providers offer more than one VPN servers with thousands of dynamic IP addresses. The benefit of this is that if you get blocked on one IP address you can always choose the second.

Also, VPN is not just another website unblocker, it encrypts and secures your internet traffic from unauthorized access of ISPs, governments, hackers, and malicious entities. VPN is the fast, reliable, and secure way to surf the internet on any device, at any time, in any place.