The topic of privacy and security online can be a tricky one depending on where you are in the world. Laws can make it easier for governments to access the personal information of individuals while making it more difficult for individuals to gain an appropriate level of protection whilst conducting their business online.

For this reason, some internet users rely on virtual private networks (VPNs) to level the playing field and to gain some anonymity online for themselves. However, there can be some confusion as to the legal ramifications of using a VPN and whether they can ultimately get in trouble for it.

Because they let you access sites without exposing your ISP, governmental bodies, hackers and bots with bad intentions can’t see you. It’s even possible to connect to the internet from another country all without leaving your living room. But is doing this actually legal? And what are you legally allowed to do whilst using a VPN? Let’s take a deeper look into the legality surrounding VPN usage:

What is a VPN?

Firstly, let’s cover what a virtual private network actually is. VPNs are a set of physical or virtual devices that act as a local network. When you use a VPN, you can launch a strong, highly encrypted connection to the internet via a server in a remote location.

Because you’re using anonymous servers, your true IP address is masked and it becomes extremely difficult for external individuals to access or modify the data that travels between your browser and the internet.

This high level of encryption is advantageous for businesses that have remote employees who need to access the company servers securely without exposing confidential information. It’s also helpful for users who regularly connect to the internet on public WiFi networks in places like coffee shops or high streets – because their connection is encrypted it means that other individuals who are using the same connection can’t snoop on their actions.

VPNs can also help users to access region-locked content like TV shows and games that are yet to be released in specific locations. But is all of this legal? Can you get in trouble by browsing the internet anonymously? And is it really possible to get away streaming a film on US Netflix while you’re based in the UK? Let’s look into the legal side of using VPNs by addressing three things that you need to know:

The answer to this question is: it depends on where you are. Thankfully, in most countries around the world, VPNs are perfectly legal. However, there are a few countries that have more stringent laws regarding VPN use, so it’s worth taking a moment to double-check. 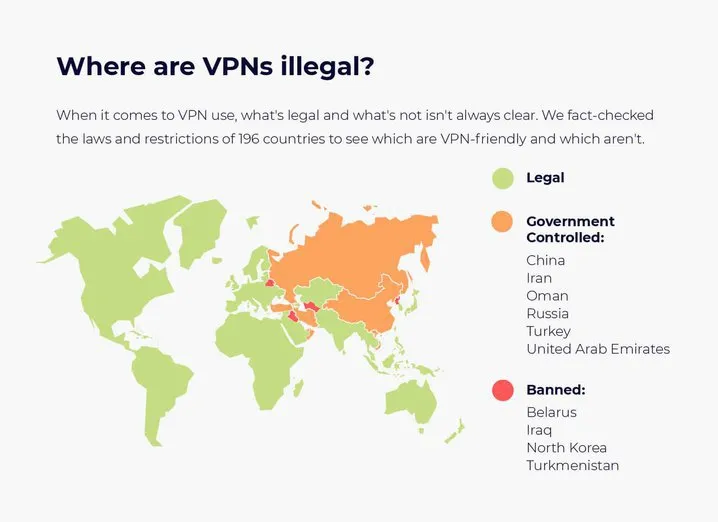 As the map above shows, VPN usage has been outright banned in Belarus, Iraq, North Korea and Turkmenistan, whilst usage is largely government-controlled in nations like China, Iran, Oman, Russia, Turkey and the UAE.

One of the most notable reasons why so many of the countries listed above take a dim view of the use of VPNs is down to the fact that their governments intend to restrict access to international news outlets in order to prevent citizen dissent – rather than there being a concerted effort to get users to stop streaming the latest blockbuster release for free.

Although arrests and prosecutions for travellers unwittingly using VPNs whilst in restricted countries are hard to come by, it’s worth making sure before you go on holiday or a business trip that you’ve stopped using your VPN software before your arrival.

As for the rest of the world, VPNs are widely seen as a perfectly acceptable tool for use, with its adoption rates steadily increasing as more workers begin conducting their business from home in the wake of the Covid-19 pandemic.

The short answer to this is yes. Using a VPN to stream content online is perfectly legal – however, it could contravene the streaming company’s terms of use. Provided that you’re in a country where the use of a VPN is allowed, you can use it to watch TV and movies – even if they’re geo-locked for viewing only in certain countries.

If a streaming service notices that you’re using a VPN to view its geo-locked shows, there won’t be any legal implications for you. For instance, in the case of Netflix, the company displays a warning asking you to disable your VPN but it’s unlikely to incur any fines or the suspension of your account.

Today, streaming services are attempting to wise up to VPN usage in a bid to ensure that their shows only air in their intended regions. However, high quality virtual private networks are capable of bypassing this detection software – allowing users to view content from just about anywhere across the globe.

Despite this, it’s important to note that the response of streaming services to VPN users could change in the future which may leave your account more at risk, so remember to exercise some level of caution.

VPNs are a great way of instilling greater levels of privacy and protection to your browsing activities online, but just because they’re legal to use, it doesn’t mean that you can’t do illegal things with your virtual private network.

Under the Investigatory Powers Act of 2016 in the UK, VPN service providers can be forced to share information surrounding a user’s internet activity to the government. Although these instances are often rare, it’s still possible for it to happen.

In the case of UK legislation, VPN providers that operate from outside the country could theoretically be exempt from these laws, there could still be other approaches that the government uses to track down individuals it suspects are using VPNs to hide criminal activity. These measures can also be used by other governments around the world.

With this in mind, it’s important that you never look at VPNs as a tool for indulging in illegal activity. Although downloading pirated content is relatively common online, it’s still against the law and punishable if you’re caught.

With virtual private networks, like many things in life, it’s important to use the technology responsibly. Although your connection is private, it won’t protect you if you are caught breaking the law.